Curly leaf pondweed is a prolific aquatic invasive plant that occurs in shallow waters with soft substrates. It begins growing early, germinating the prior fall and growing under the ice, usually dying by mid-summer (potentially creating dissolved oxygen problems due to algal blooms and decomposition). 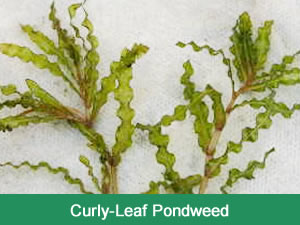 Curly Leaf Pondweed was first detected in the Manitowish Waters Chain in 2010 in Island Lake and Rice Creek by a volunteer ‘Lake Captain’ trained by our program. In 2011, two additional areas were identified, at the mouth of the Manitowish River at Island Lake and in the Spider-Island Channel. Also in 2011, the Rice Creek infestation was mapped by the Vilas County Invasive Species Coordinator and the NLDC. In 2012, Onterra, LLC found additional areas in Spider Lake and Island Lake while mapping the quantity and variety of aquatic vegetation. The NLDC, with the help of a ‘Lake Captain’, found an additional location in Stone Lake in 2012 which was hand-pulled in an early response by NLDC staff and volunteers.

Early in the spring of 2012, a certified applicator conducted a chemical treatment of the curly leaf pondweed infestations in Island Lake and the Spider- Island Channel, which unfortunately was unsuccessful. Treatment will occur again in the spring of 2013. The TAISP in conjunction with Onterra LLC are investigating varying adaptive management options for control of the curly leaf pondweed in the chain.